The first two Silent Night, Deadly Night films get all the glory — to the point where casual horror fans may be surprised to learn that three more installments were produced in the franchise. The 1984 original generated highly publicized controversy by showing its killer dressed as Santa Claus in advertisements, while the 1987 first sequel gained cult status for its over-the-top campiness and liberal reuse of clips from its predecessor.

Diverging from the franchise’s headline-making narrative may have been a death knell — look at how long it took viewers to come around on Halloween III: Season of the Witch — but the home video market’s lower stakes allowed for such a risk, and the series is far more interesting for it. I believe Initiation is the unsung highlight of the bunch. What other holiday movie can be described as The Craft meets Rosemary’s Baby by way of Junji Ito? 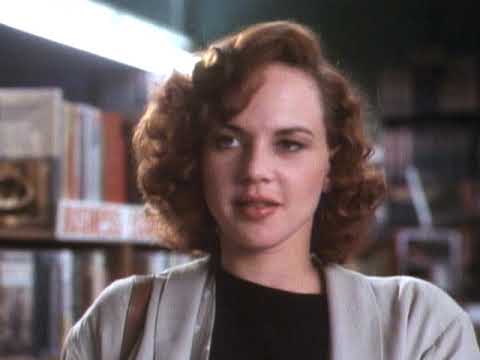 Clint Howard (Evilspeak, Rob Zombie’s Halloween) sets the story in motion as a homeless man named Ricky — although it’s unclear if he’s supposed to be Ricky the killer Santa or merely a nod to the franchise’s roots — who witnesses a woman spontaneously combust on a rooftop before jumping to her death. Kim Levitt (Neith Hunter, Born in East L.A.), a classifieds writer hoping to make it as a reporter, takes it upon herself to investigate the incident, leading her to uncover a coven of witches with questionable intentions.

As they did with Society, Yuzna and Daniel inject Initiation with social commentary. An ambitious, career-driven woman in a male-dominated industry (“The only way to get anything around here is if you have a dick,” she laments), Kim embodies the film’s feminist undercurrent. She’s also dating a reporter (Tommy Hinkley, The Little Vampire), leading to harsh judgment from their colleagues. The office’s boys club is headed by a chauvinistic editor-in-chief played by Phantasm favorite Reggie Bannister.

Logic occasionally seems like an afterthought in Silent Night, Deadly Night 4, allowing the film to stew in its fantastical eccentricities. Its use of spirals as symbolism — in this case, representing women’s power — brings to mind Uzumaki. The concept is left underdeveloped, but the Ito influence extends to Screaming Mad George‘s “surrealistic visual design & effects” (as he’s credited in the kaleidoscopic, Saul Bass-esque opening titles).

He may not be a household name like Tom Savini or Rick Baker, but — with a gooey resume that includes the infamous shunting in Society, the disturbing cockroach sequence in A Nightmare on Elm Street 4, and Alex Winters’ memorable mutation in Freaked — Screaming Mad George was the artist to call when you wanted nightmarish body-horror effects (and maybe you didn’t have the budget for Rob Bottin).

George brings his distinct style to Initiation, crafting such unsettling imagery as a dog-sized cockroach skittering around an apartment and a hallucinatory indoctrination ceremony. The latter involves Kim physically manifesting her fear as a wriggling, parasitic creature that is painfully expunged from her body before having its gelatinous innards squeezed out onto her face. And that’s not even the titular Initiation; that comes later in an orgiastic sequence culminating with Kim shedding her skin to become a new woman.

Initiation has one glaring downfall: its holiday atmosphere is the least prominent of the series by a wide margin. Not only is it set (and shot) in sunny, snowless Los Angeles, but Christmas is irrelevant to the plot – the lead character is Jewish, in fact, although that has little pertinence as well – and seasonal decor is minimal among the production design. Its connection is so tenuous that the film was originally released in the UK under the title Bugs with no mention of its franchise lineage.

To make horror fans’ holidays bright, Initiation is now available on Blu-ray as part of the Silent Night, Deadly Night Collection alongside Better Watch Out and The Toy Maker via Lionsgate’s Vestron Video Collector’s Series. Not only are the high-definition presentations immeasurably better than the murky DVD transfers, but new extras have been produced for all three titles.

Initiation features a commentary by Yuzna, viewing it for the first time in 30 years. He proudly points out the simulacra – images hidden in plain sight that look like something else – peppered throughout the movie, many of which may otherwise be missed (and some were indistinguishable prior to the Blu-ray). It also has interviews with Howard, Daniel, George, and executive producer Richard Gladstein (who went on to produce Reservoir Dogs shortly after wrapping up on The Toy Maker) to offer insight into the Christmas curiosity.